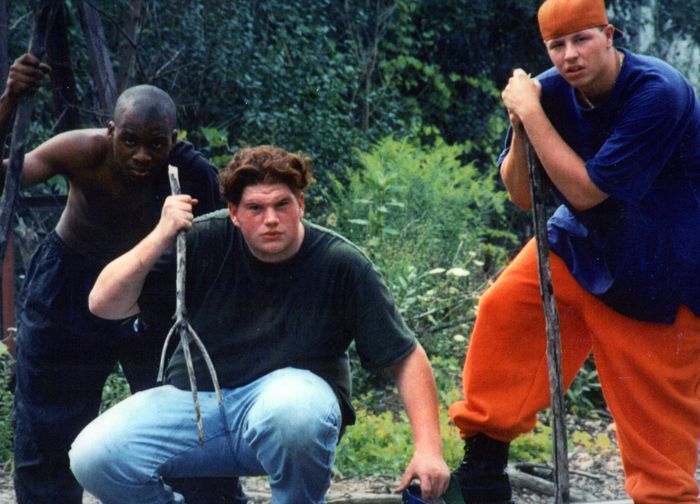 House Of Krazees is an American hip hop group from Detroit, Michigan. The group was originally composed of emcees The R.O.C. (Raps On Contact, later known as Sol), Mr. Bones, and Hektic.

House of Krazees performed a style of hardcore hip hop known as horrorcore, their particular style referred to as “retro horror music,” and was originally active from 1992 until 1997. The original lineup reunited in 2013 and currently perform together at times under the HOK moniker. They released a box set and new music in 2018.

Hektic and Mr. Bones left the group in 1996 to form Twiztid, changing their stage names respectively to Monoxide and Jamie Madrox, which put the group on a temporary hiatus. In 1997, The R.O.C. resurrected House of Krazees, changed his stage name to Sol, and continued to perform under the House of Krazees name (for one album, to fulfill contractual obligations for one more H.O.K. album) with rapper Skrapz (formerly of 2 Krazy Devils with Psycho C). This new edition of House of Krazees released one album in 1999, “The Night They Kame Home,” and the House of Krazees name was retired by the fall of 1999. Sol and Skrapz left their old manager “Uncle Kreepy”, and formed the duo HaLFBrEEd, releasing the majority of their material on their own record label, Virus Independent.

HaLFBrEEd was active up until 2003, after only four years of activity. In 2013, it was rumored and semi-announced that HaLFBrEEd was reuniting after a decade apart. Similarly, it was rumored around this time that House of Krazees were reuniting as well with the original lineup of Sol (who later changed his name back to The R.O.C.), Jamie Madrox, and Monoxide. However, nothing came of these rumors, despite another House of Krazees compilation album being released in 2013, “Casket Cutz”, which was sold through Twiztid’s online store.