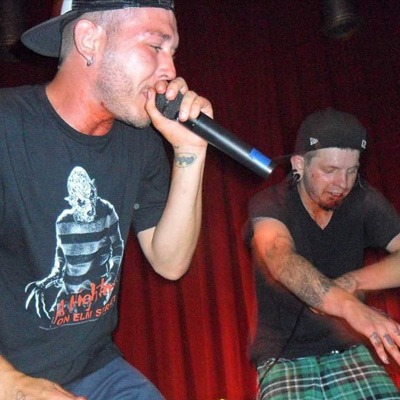 The members of Project: Sin met in high school through a strange arrangement; Pop’N had recently become close with T.C. (his partner from N.D.C, Never Dead Clique). He was dropped off early and smoking weed on the front porch of the school while a portable CD player with speakers attached consistently bumped Brotha Lynch Hung. Because of this, an immediate friendship with T.C. was formed. Pop’N was then placed on a 10 day suspension for fighting, and upon his return, he ran into T.C. who was conversing with Stitchez and Insanity of mental ward. He explained his absence and that day, after school let out, the world change.

Pop’N and Stitchez linked up, got smoked out on the regular, and began experimenting with any and every random drug they could. Their musical bonds were very much in line and when time allowed, they began collecting beats from European producers to create a new style and sound of horror rap — club banging crunk-styled beats, almost dubstep. At first, the duo were just making music for fun, then after the track accumulated, they decided the time and effort they spent deserved a title and name.

The name, “Project: Sin,” and the title, “Open Them Legs And Let Us In,” a message to the world and to the music industry. It became an instant hit among the local scene. Any show that Mental Ward and NDC performed at, now also delivered Project: Sin sets, as well. This still wasn’t enough for Pop’N and Stitchez, however.

They traveled to New Mexico and spent time with SKR. Together, they traveled through the Southwest states of New Mexico, Arizona, and Texas, and all who witnessed them were sold immediately.

The duo continued to make music as a group, and they began working on a second album, which never actually came to fruition. Their friendship and love of music was felt by all who witnessed it. To this day, people still request the link for the digital download of Project: Sin’s one and only album.