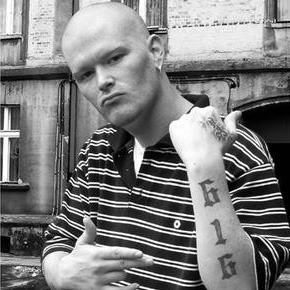 Menacide was a veteran of the “Gun Rule” (Grand Rapids, MI) Hip Hop scene with several credible accomplishments attached to his name. He released over a dozen albums, sat in the same studio as Eminem (while working with Proof Of D12), and paid enough real dues to cover the work ethic of a dozen indie artists combined. In 2001, his “In My World” E.P. garnered so much attention from local media, that the Associated Press picked up the story and blasted it across the national news wire. Cutting his teeth by pounding out show after show locally, he also went on to be featured on the syndicated Michigan Radio Network (MRN) for an almost unheard of nationwide promo-cast.

2003’s “Knuckle Up” LP introduced bored underground fans to a world of revised hardcore rap, while showcasing Menacide’s ability to spin new life into angry anthems. In 2005, his “Drugz” LP stole the number one selling spot at several online media outlets, and went on to become a fan-favorite with such bangers as “Braggin’ Rightz”, the proud-to-be-below-radar anthem, “Underground King”, and “Drugz” (Feat. Proof Of D12) (RIP). “I’m grateful for having had the opportunity to work with him (Proof) for the title track on that record. He lit a fire under my ass that’s been burning ever since”, he affirms. It was during this studio session in Detroit where he was invited to meet 8 Mile famed Eminem, whom he humbly acknowledges as the best thing to ever happen to the relevance of Michigan Hip Hop.

A proponent of unique self-marketing, Menacide’s releases have been attached to some rather creative promo campaigns, including a contest for buyers of his “Drugz LP”, who were entered into a drawing to win a real body bag stuffed with CD’s, posters, and other merch goodies. Following with the album’s “paraphernalia” theme, the CD came packaged in a genuine police-evidence bag, along with a bonus poster and bandanna.

Always a proud contributor to the ever-growing phenomenon known as “The Wicked Underground”, Menacide worked with some of Horrorcore’s greatest talents including Detroit’s King Gordy, Prozak and Madness (of Saginaw’s Bedlam), Q Strange, and many more. In 2006, he performed via honorary invitation at Prozak’s annual “Wickedstock” festival alongside Tech N9ne, Project: Deadman, and pioneering Detroit artist, The R.O.C. Menacide was also the creator of the internet-famed “Devil’z Nite” compilation series, which he ran consecutively for six years to help push talented artists to the forefront of the exposure pool. In 2005, he was nominated for and won the “Best Rapper” award by way of fan votes at TCN, a network within the genre.

In September of 2021, it was reported that Menacide had, sadly, passed away.