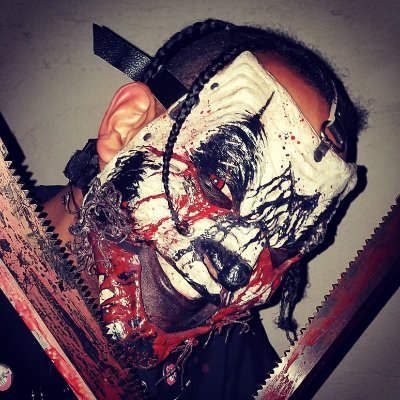 For those of you who have never known about the HeadHunter Clown Chuckklez, he has come from Hell and back to get to where he is today. By coming with the most sickest and evilest music to the underground that no one has ever seen or heard before.

He started horrorcore music at a very young age when he was in the 8th grade in the year of 2006; he progressed more and more until he became serious with his music and started recording it for the first time when he graduated out of High School in the year of 2010. He had contacted with a local producer named Soerangit Aniff aka Mo from his hometown of San Jose, CA who actually has been working with a lot of well known talented MCs including Kung Fu Vampire (once) and producing beats. Chuckklez started out with one of his very dark tracks that he wrote “Mental Patient©” which is actually an influence by real life Psychopaths, Murderers and parts of his childhood memories. But he wanted it to be kept in the darkness until the time was right and started writing more Sick music for his pleasure. Since then in 2011, he finally released it along with a new track “Keep the Heads and Eat the Rest©” which was inspired by the movie Sin City and became well known in the underground today.

He has worked and collaborated with one of the most well known and talented MCs from the U.S. to overseas such as Scum, Insane Poetry, Dosia Demon, DJ Lil Sprite, Zomb’ G, Skyler Torquemada (Italy), Kaotic Klique, Dark Half, Legacey, Wolff, Phr0zen, Omega Sin, Insane Loc, Bloodshot, KGP, MC Cumblood from Butchers Harem, 089 Clique, Rozz Dyliams, and much much more.

Throughout this day in his career, he has been keeping it real in music and giving it all that he has got. Not just for himself, but for the fans that he likes to call the “Freaks & Freakshows” who are down with the real sick music and have he’s back a 100%.