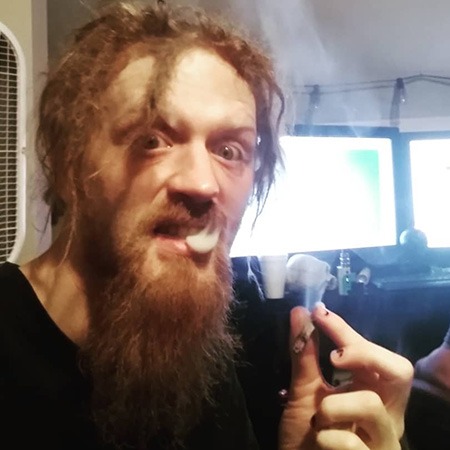 BAMbam the Voodoo Chi7d is an emcee from Lansing, MI.

He is one half of the group Suicide Saints, and has been associated with other acts including Cannibal Disciplez and The DisKarded.

Bambam the Voodoo Chi7d is a living embodiment of the 7, a founder of many music movements, and an absolute madman.

For years upon years, Bam has been living the wicked shit. Rarely veering from the path of the dark and morbid corners of the music universe. Even as a young man, on the bus with his crew, the voodoo chi7d had a firm grasp of his musical Identity personal ideals. mix in a heavy dose of substance-based experimentation and a hearty helping of psychological therapy and the result is an eclectic blend of lyricism and lunacy.

It’s this unique approach that helped lead Bam to a relative degree of fame among the horrorcore community, as well as securing a spot in the memories of many wicked shit enthusiasts with his group ‘Cannibal Disciplez’ alongside famed MC ‘Cannibal Carib’.

Throughout his long and storied career, Bam has performed with musical greats such as Boondox, Dark Half, Anybody Killa, King Gordy, Axe Murder Boyz, Lil Wyte, Zug Izland, Shauna, Project Born, and Whitney Peyton just to name a few!

Now, he’s joined forces with the equally unusual Capital Chris to form the Suicide Saints with the goal of global domination! “Suicide Worldwide” is the battlecry. Will it be? Only time will tell…