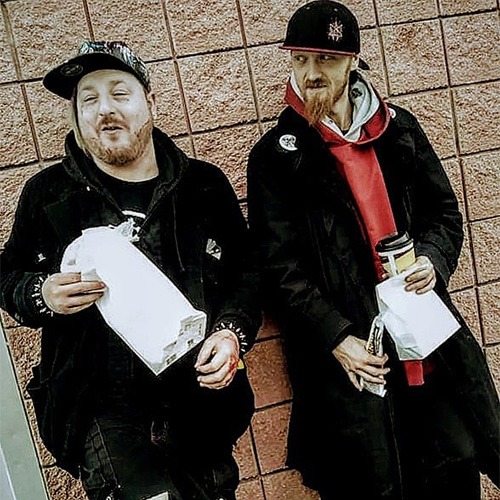 The Suicide Saints are a Horrorcore/Acid-Rap duo based out of Michigan (Formerly NC and PA respectively), consisting of Horror/wicked-shit veteran ‘BAMbam the voodoo chi7d’ and former metal-band-vocalist-turned-mc ‘Capital Chris’.

The pair formed while bonding over mutual strife and homelessness, documenting their uprise in a series of internet video documentaries entitled ‘Scrublife.’ During the early days, while living out of a recording studio in a self-storage complex, the Saints recorded three mixtapes-worth of tracks that would later become ‘Saintsmas Carols 2014’ and the ever-popular ‘Rough Shit 1’ and ‘Rough Shit 2.’ It was also during this time that the scrubcast was given life, first as a web chat hangout then, later, as the podcast you know and love (or hate, or love to hate).

The Saints have also performed several shows since their inception, performing with underground greats and local heroes alike all across the East Coast and Mid-west. One glance at the musical resume of the Suicide Saints is all you need to know that they are and will be a force to be reckoned with in the world of music. The queen city a-holes are now a global force of wickedness, and they love you… especially when you hate them…