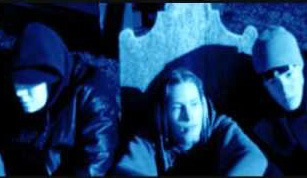 Temple Rain consisted of friends and fellow lyricists, Lo Key, Sleepy, and Appirition (better known as Green Vilin). In 2003, they released their debut LP “The Awakening,” a fusion of hip hop and horror. Boasting 19 tracks, the LP was given away free on the internet and locally.

Shortly after its release, “The Awakening” and all Temple Rain merchandise was banned in 3 Pennsylvania schools for “promoting / condoning mass suicide and / or gang violence”. This gesture created a stir in the PA underground.

After being temporarily shut down on several occasions, the hype died down and things appeared to return to normal for the trio. Slipping back into the studio, the group started they’re new project, “The Lost Boys EP.”