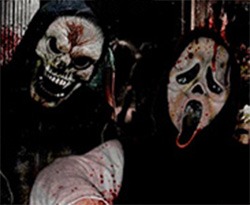 Rukus of iconic horrorcore group, Kryptik, and Cutthroat began making music together in 2011. The duo released a few collaborative projects under the newly formed Butchered Beat Productionz before officially dubbing themselves the Suburban Legendz. They would go on to release nearly a dozen albums under the moniker from 2013 to 2017. Shortly thereafter, BBP closed its doors and the group disbanded.