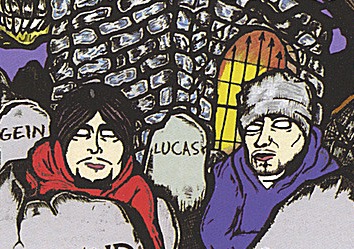 Phantazm has corrupted the wicked underground from 2001 to right now. Torchur (Three One Se7en) with Skar-E (Rigamortiz) and Sinister X (SyckSyde) released three albums under the name. It’s like a Horror Movie in Audio format.

In 2002 Krakatoa Entertainment with the help of the infamous label known as White Devil Productions released Poltergeizt. Sixteen tracks, featuring Q-Strange, Hex (L.U. Cipha), Bob E. Nite (Sycksyde), and more with production from Bob E. Nite, Khult, Q-Strange, and more. Three years later, The album was basically out of print and still requested from the fans. Krakatoa Entertainment with the help of Long Range Distribution re-released the CD as Poltergeizt: The Resurrection. This disc is not your typical re-release, Torchur re-recorded all of his vocals from the original album and he added some new/unreleased tracks to the CD plus it was re-mastered. 18 tracks, It may have the same album title and the same track titles but its a completely different release. In 2006 Krakatoa Entertainment released Phantazm II Reincarnation. 19 tracks, featuring Q-Strange, KGP, Majik Duce, McNastee, and Ensizon (R.I.P) with production from Bob E. Nite, Q-Strange, Khult, 40 oz, Bad Mind, Torchur, and more. This was the last album from Sinister X so you know its special.

I will end this on a good note, Phantazm III coming soon featuring the return of a horrorcore icon Black Bart (State of Cykosis) as the new member. “Morbid Existence” is coming soon, Are you ready? The third time is the charm, this will the best Phantazm album so far!!!! Torchur/Phantazm has played shows with Esham, Natas, Mastamind, ABK, Project Born, Halfbreed, Level Jumpers, Sol/R.O.C, Hell’s Kitchen, Bedlam, Cap One, Insane Poetry, 2 Sins, Dice, Vishiss, Uncle ILL (of Da Ruckus), Perfect Nothing, Dent, Paradox, and many more. Torchur/Phantazm has been featured on these tours Helltown, Amerikas Nightmare, and Hellava Night. Torchur/Phantazm has been featured in national rap magazine Murder Dog magazine 4 times. Torchur/Phantazm has been featured on 20+ albums besides their own projects. Also check out Three One Se7en (Remember LuNatic Clicc?) featuring Torchur. Three One Se7en “Poetic Violence” feat. Mastamind (Natas), Black Bart (Cykosis), & Da Lokust was released in 2007. Check it out and also check out the other three Phantazm albums. Hit me up if you are interested in buying CDs.