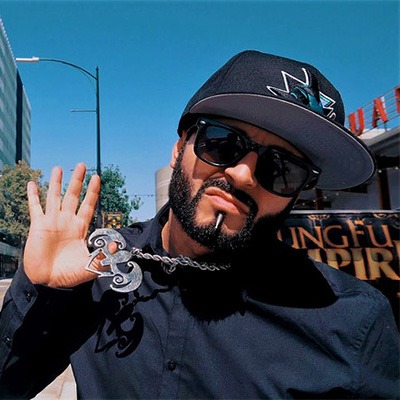 Kung Fu Vampire is an American rapper and the vocalist of the musical group of the same name. He is from San Jose, California, and has nationally toured with Twiztid, Tech N9ne, Locksmith, ICP, Brotha Lynch Hung, Wrekonize and more. In addition, KFV has collaborated with musicians such as jazz trumpeter Eddie Gale, Hopsin, Brother J of X Clan, Cougnut, Whitney Peyton and Spice 1.

Kung Fu Vampire began breakdancing at the age of six, and taught himself how to rap and sing while playing drums and bass as a hobby. At the age of 12, his aunt began taking him to see concert performances, and introduced him to a gothic style of dress. At 14 years old he and three friends formed a group infusing classic hip hop with funk and electronica. In 2001, as a late teen he adopted the name “Kung Fu Vampire” during a conversation with his friends in which they discussed the idea of a martial arts film featuring vampires. Kung Fu Vampire formed a band, and he also used the vampire concept to write a novel (unpublished). He describes the sense of balance as the “Yin and Yang of Fang.”

In 2006, the group was voted the best local band by Metro Silicon Valley readers. Director Darren Lynn Bousman was impressed by Kung Fu Vampire’s performance style, and pushed for the rapper to perform at the release party for Saw III as well as opting to do a music video. Kung Fu Vampire has also performed at The Playboy Mansion. Bousman’s association with Kung Fu Vampire continued with performances at the release party for Repo! The Genetic Opera, and Bousman included Kung Fu Vampire’s song “Dead Girls Don’t Say No” in the film Mother’s Day. In 2009, Faygoluvers featured Kung Fu Vampire’s music video “iCount” on the site, attracting the attention of Twiztid, who invited Kung Fu Vampire to perform as the duo’s opening act during their 2010 “Slaughterhouse” tour. Since 2010, KFV has done 13 tours including 2 in Canada and 4 appearances at the Gathering of the Juggalos in Cave-In-Rock, Illinois, and Thornton, Ohio. Kung Fu Vampire has not signed to a major label, and remains an independent artist. In 2012, Kung Fu Vampire appeared in the music video for E-40’s song “Zombie” featuring Brotha Lynch Hung and Tech N9ne. In 2013, Kung Fu Vampire appeared on the reality show Oddities: San Francisco on the History and Science Channel. In late 2015 KFV released a music video, “Slice Of Life”. On October 16, 2015, KFV’s song “Turnt Up” appeared in the movie Tales Of Halloween which landed at #1 on iTunes for a month straight.

On January 1, 2017 KFV was invited to participate in the Juggalo March On Washington. He accepted on January 2, 2017, stating that the Juggalos have earned his respect and vice versa and would give a free day to them anytime.