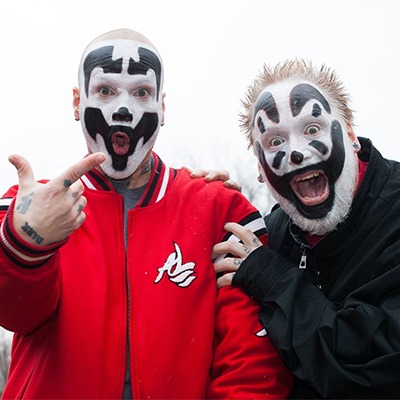 Insane Clown Posse, often abbreviated as ICP, is an American hip hop duo composed of Violent J (Joseph Bruce) and Shaggy 2 Dope (originally 2 Dope; Joseph Utsler). Founded in Detroit in 1989, Insane Clown Posse performs a style of hardcore hip hop known as horrorcore and is known for its elaborate live performances. The duo has earned two platinum and five gold albums. According to Nielsen SoundScan, the entire catalog of the group has sold 6.5 million units in the United States and Canada as of April 2007. The group has established a dedicated following called Juggalos numbering in the “tens of thousands.”

Originally known as JJ Boyz and Inner City Posse, the group introduced supernatural- and horror-themed lyrics as a means of distinguishing itself stylistically. The duo founded the independent record label Psychopathic Records with Alex Abbiss as manager, and produced and starred in the feature films Big Money Hustlas and Big Money Rustlas. They formed their own professional wrestling promotion, Juggalo Championship Wrestling, and later collaborated with many hip hop and rock musicians.

The songs of Insane Clown Posse center thematically on the mythology of the Dark Carnival, a metaphoric limbo in which the lives of the dead are judged by one of several entities. The Dark Carnival is elaborated through a series of stories called Joker’s Cards, each of which offers a specific lesson designed to change the “evil ways” of listeners before “the end consumes us all”. The original lineup of Insane Clown Posse was John Utsler (John Kickjazz), Joe Bruce (Violent J) and Joey Utsler (Shaggy 2 Dope). John Utsler left before Carnival of Carnage was released in 1992.