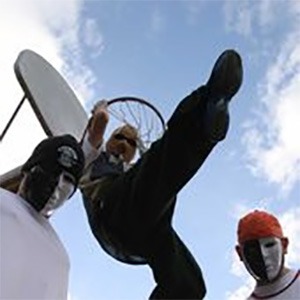 Fallguy was a rap rock/metal group from Phoenix, AZ. The group started out as a five piece hardcore rap group, and was forced to run all of its rhythm tracks on DAT as they were offered the opening slot on Twiztid’s “Mirror Mirror” tour with limited resources.

The handful of dates the band performed on quickly gained them a cult following as fans began showing up wearing ski masks, Intrinzik’s trademarked disguise. The now three piece band went on to penetrate the underground rap market with the release of their 2003 self titled EP which contained the memorable anthem “Getchyoskimaskon.”

Fallguy continued to do shows in the southwest including the South By Southwest festival in both 2002 and 2003 opening up showcases featuring Mushroomhead, Anybody Killa, and Zug Izland. The band disassembled in 2004 shortly after the release of their biggest release to date entitled “Apocalypse 6T7” that gained the band a distribution in Japan via RB-Records.com. The number 67 was used by fans to call out the letters F and G. Lead guitarist Driver Williams went on to join country music star Eric Church’s band and rhythm player Joe Dank moved to Chicago, IL to work in marketing for a Randall Amplifiers.