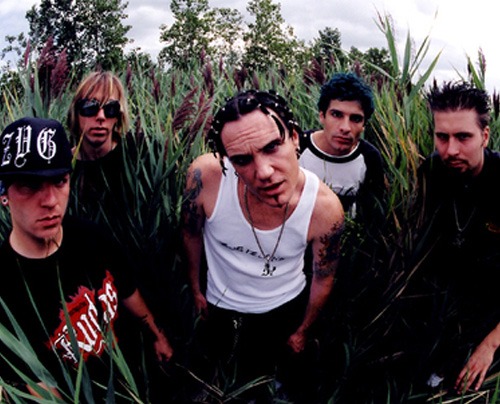 Zug Izland formed in 2001, named after an industrial site near Detroit. The band was formed by Insane Clown Posse member Violent J (Joseph Bruce) and Mike Puwal, out of Bruce’s love of rock music. Bruce wanted to know what a “Juggalo Rock” band would sound like. Zug Izland’s songs were written and developed during the recording of Insane Clown Posse’s album The Wraith: Shangri-La.

Bruce and Puwal completed the basic tracks for two songs, but still required a lead singer. Bruce wanted a singer similar to Kurt Cobain, Eddie Vedder, Jim Morrison, or Axl Rose. Although Syn was sought by three other bands at the time, he joined Zug Izland as their official singer. The band broke onto the national competitive music scene in 2003 with their debut album, Cracked Tiles.

After parting ways with Psychopathic Records after the release of 3:33, Zug Izland began writing and recording songs for a new album entitled “Promised Land”. The ill-fated album was never released however tracks ‘Next To Me”, “Lies” and “How Does it Feel” were released officially online with leaked songs “Promised land” and “Woke Up Screaming” surfacing online some time later. The Syn written and recorded “Chemical Girl” was also released via the official Zug Izland MySpace page, however it has also never featured on an album.

In 2005, Zug Izland recorded a cover of Pink Floyd classic “Another Brick In The Wall”. The track was a crowd favorite that Zug Izland would often cover at their live shows. Re-working the lyrics, the new track took a “Juggalo” theme replacing Pink Floyd’s child chorus with a group of angry Juggalos screaming “Hey! People! Leave Juggalos alone!” in reference to the Juggalo culture’s misrepresentation in mainstream media. The finished track was made available through the ZugIzland.com, but never made available on an official release.

In August 2013, Zug Izland’s greatest hits compilation “Toxicology: Zug Izland’s Dopest Bangers” was released on Psychopathic Records, their first official release since 3:33 in 2004. The album featured a collection of tracks from their debut album Cracked Tiles, three remastered songs from 3:33, and three new recordings. The new songs reverted to the writing/recording process of Cracked Tiles with Violent J of Insane Clown Posse writing lyrics and Mike P writing the music. According to Faygoluvers.net the line up is now Syn, Mike P, D-Lay, and 2 Phat.