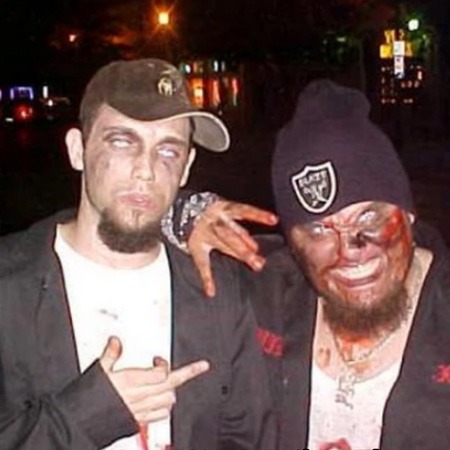 Originally Secrets Of Sevinteen (later changed to Secrets Of Thirteen), the group consisted of Evul Ded and his homies, Spyder and Scrub. In 2002, the group was joined by Assassin. Telling comic book-style stories of extreme horror and death, they performed many shows, and spread the SOT music until 2006.

SOT went through many changes in a very short time. The earliest incarnation of SOT was in 2001, when Evul (then “Evil”) decided to start a rap group. The original lineup consisted of Evul, Spyder, and Scrub. A few songs were written, but nothing was ever recorded. It is said that the first SOT song was a song called, “It Was Me.” The original lyrics were long lost, but the song later evolved into the track, “Choke Ya Face,” which appeared on the Secrets Of Thirteen self-titled Album.

After Spyder and Scrub stepped down, the lineup then became Evul, Graveyard, and Dirty J (Graveyard and Dirty J are childhood friends of Evul.) Again, nothing much came of SOT except a few more written songs and a few basement recordings. Due to various reasons, Graveyard decided to quit SOT, and so Evul and Dirty J continued on, without him.

Time went by, and Assassin then joined SOT, after a long conversation with Evul by phone. After much planning of the first album, the three began recording homemade tracks at Assassin’s house. Various basement tracks, including the Original “Secrets Of The Cemetary”, “House Of The Dead”, and many other tracks with Dirty J’s original verses still exist (the album “SOT- Chopped & Murda’-Mixed!!!” features these songs). After a short time, Dirty J decided to leave SOT to pursue other things, and so the final lineup was just Evul and Assassin.

In Mid/Fall 2002, they went into the studio and began recording their self-titled debut album, “Secrets Of Thirteen.” Although the album was made with a very small budget, it came out well, and was well received by the underground. Seventy five sampler CD’s were pressed up and given away on Halloween, at a Hangman’s House of Horrors, when Insane Clown Posse was there, promoting their album, The Wraith: Shangri-La. Every Sampler was quickly grabbed up, and are now out-of-print and very hard to find. The album was finally released on January 13th, 2003 and after releasing the album, every copy was quickly sold (about 75-100 copies.) SOT then began work on the follow-up album, a two-part album, the first part, “Memoirs Of Walking Deadmen- Side 1: The Heartless.” Side 1 of ‘Memoirs’ was released in September of 2005.

Evul and Assassin had really good success with SOT, but due to various reasons, they decided to split. Although there are no hard feelings between the two, they haven’t spoken in years. The last SOT album, “Memoirs 2: The Syckopath,” is still due to be released as promised, some day.

Evul is currently working on the follow-up to his first solo album, “Under The Dirt” (2009), as well as tracks for Creature Clique’s next album, “Call Of The Void”. Assassin’s album, “Assassination”, was never released. ‘Memoirs 2″ will be the last official SOT album, until further notice.