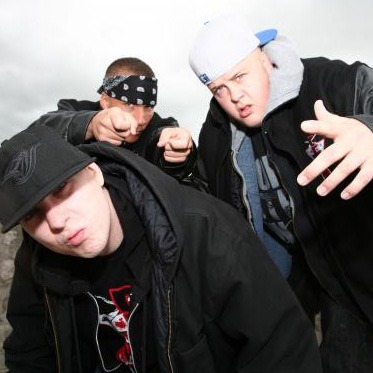 Psych Ward is a hip-hop trio out of Ontario, Canada who has built a cult status within the underground rap community. Psych Ward consists of three members: Shallow Pockets, Kid Fade, and also JNyce who works on a lot of the production for the group. Their blend of hardcore and horrorcore mixed with vivid imagery, puns, metaphors, punch lines and rapid fire flow helped solidify Psych Ward as a group that isn’t just your regular everyday rap crew. They have something more to say and plan on solidifying their unique style of hip-hop in the rap game.

Originally formed in Peterborough, Ontario the group began their musical vision in 2005. Kid Fade, who was initially from Scarborough, was sent to a Peterborough rehab centre as a way to avoid jail time. It was then that he met Shallow Pockets who had a buzz going around town as the local rapper. They wanted to form a crew. The only thing missing was production; so they went to the biggest beat maker around town; a young up and coming producer named JNyce. Once the three of them got together; the concept for the Psych Ward group was formulated. The three of them had very strong chemistry vocally and lyrically, creating a new group that will take over the scene.

Their first release was a demo titled Mental Patients. It was still an early progression for the group but it caught a lot of buzz. The Psych Ward knew that they had to put out their first official album, so “Decrepid Methods” was released in 2007. The track “Blood in My Eyes” became a huge hit amongst the hardcore rap scene and Psych Ward accumulated numerous fans around the globe. The album was a success. In 2008 Psych Ward released their sophomore record “Rulers of the Damned”. This album gained even more popularity for the group as they stepped up their vocabulary and punch lines. The album was a financial and critical success and Psych Ward built a very strong fan base that stemmed worldwide.

In 2010 Psych will be dropping their newest album titled “Street Slime”. As part of their Street Slime campaign, Psych Ward will be releasing numerous music videos, rap cyphers, album leaks and commercials. The first release was the Grindhouse Double feature video “Angel Dust/Undisputed” which gained enormous success online for its collage of horror imagery. Recently they released another Grindhouse feature “Lost Planet” featuring longtime friend Lord Lhus, and production by The SnowGoons, which is quickly gaining global support. They will also be dropping several more videos within the year before Street Slime hits stores. As we enter the new decade; we also enter the Psych Ward.