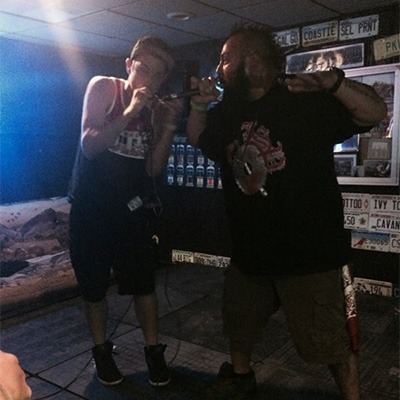 Mission:16 is a hip-hop duo from the south side of Chicago, Illinois. We push our versatility as one of our major selling points and you can find us rockin’ stages from the hood to the suburbs.

Steevy D was born and raised on the South West side of Chicago and The Beast hails from the South East side. We were brought together by our mutual love for music, hip-hop in particular, and began to work together in June of 2009. The love for what we started that hot summer in a small apartment would continue until this day and will live on continually as our resume grows longer and longer, including performances with the likes of Twiztid, Rittz, Three 6 Mafia, Twisted Insane, Anybody Killa, Project Born, Primer 55, Motown Rage, Awesome Dre, Critical Bill, Lil Wyte, Bo Deal, Lord Infamous, T.O.N.E-z, Bizzy Bone, SenDog of Cypress Hill, Saint Dog, Hopsin, Liquid Assassin, Axe Murder Boyz, Prozak, Mastamind of NATAS, Blaze Ya Dead Homie, The DRP, Boondox, Cousin Cleetus, Prozak, Scum, Mars, and many many more.

We’ve performed at venues like The Abbey Pub, Reggie’s Rock Club, TIGER O’STYLIE’S, Bada Brew, Cafe Lura, The Rap Factory, UN Club, US Beer Company, Bill’s Blue’s, and many more in the Chicago area, our out of state ventures include The Rave in Milwaukee, St. Andrew’s Hall in Detroit, CISA Studios in Hammond, IN