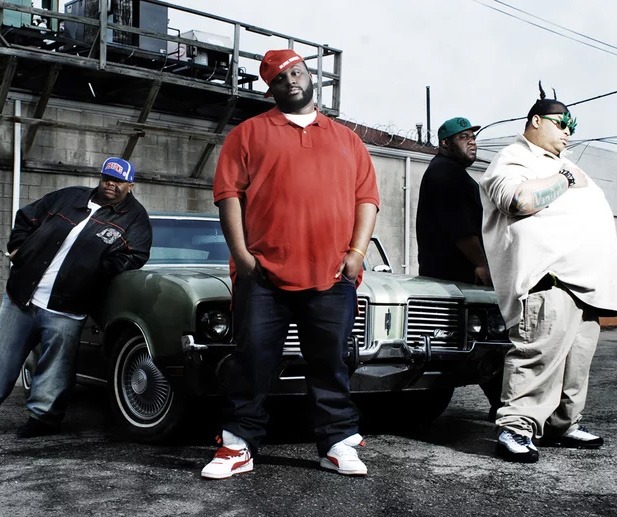 Prepare yourself, the “World Famous” Fat Killahz have arrived! Hailing from the war-torn streets of Detroit, Michigan, the Killahz are made up of four imposing emcees: Fatt Father, ShimEBangO, Marvwon, and King Gordy.

All four are veterans of the same open mic and battle circuits that birthed the likes of Eminem, D12, Slum Village, and Royce da 5’9″. All four are proficient, battle-tested lyricists. All four are explosive performers with a love for the music. All four are also constantly hungry, for hip-hop as well as hamburgers.

Fatt Father (Fatts) is the leader of the group. Fatts is capable of going from personable to menacing in a matter of moments; lyrically vivid yet down to earth, his descriptive tales of the pleasure and pain of street life pull you into his world.

ShimEBangO, maybe the largest member, possesses an agile, quick-witted flow that’s as colorful as the trademark throwback jerseys he wears. His unmistakable voice lends energy and inertia to every track he blesses.

Marvwon is a verbal flamethrower. His style is a flammable mixture of antagonistic street braggadocio and humorous pop culture references that’s guaranteed to have you hitting that rewind button.

King Gordy is indescribable, an enigma wrapped in a scowling horn-headed visage, furiously spitting rapid-fire gothic venom, yet still capable of turning heads and opening ears with a unique and soulful brand of singing. Yes, singing.

The Fat Killahz began in 2001 as an inside joke between Marvwon and Fatt Father. The joke turned into serious business; they enlisted heavyweights ShimEBangO and King Gordy shortly thereafter. Seemingly overnight, open mic after open mic was ransacked by the four fat and furious emcees. Tearing down local spots like the Lush Lounge, the Blind Pig, Motor, St. Andrew¹s Hall and the Shelter, and the State Theater, FK rapidly gained respect in the streets and a devoted following. Battle opponents and fellow emcees quickly learned that FK was nothing to play with; all four emcees were skilled lyricists and engaging performers, and as a group they gradually developed a unique sound: heavy, thumping street anthems, melodic, bouncy tracks to ride to, humorous hood stories, and healthy doses of comic relief. After smashing a number of venues (including a raucous, shirtless performance at the 2002 Impact Convention,) the Killahz decided it was time to hit the studio.

They released the 2 Fat, 2 Furious mixtape to positive reactions throughout Detroit city, and the public just wanted more. Making an appearance on King Gordy¹s solo album The Entity, the single Fat-Tastic 4 rose to #1 on the college hip-hop charts. Fans still weren’t satisfied. FK followed up a successful run supporting Gordy as the opening act on D12’s US tour in 2004 with the release of their WFKR 31.3 FKM mixtape.

They were finally treated to the full-length they had been waiting for: on March 15th, 2005, Guess Who’s Coming To Dinner? was released. Featuring production from hard hitters such as Denaun Porter (D-12, 50 Cent, Young Buck) and B.R. Gunna (Slum Village), Guess Who’s Coming To Dinner? displays the Fat Killahz dynamic song writing, vivid street savvy lyrical poetry, and comedic wit. With a distribution plan in place, hip-hop heads across the country better prepare themselves to deal with the world’s largest group. Fatt Killahz are currently working on their sophomore album titled Fat Tuesday.