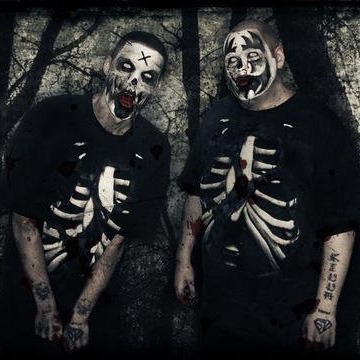 The Dead Dirty Carnies were a two person underground rap group. The group was formed in 2003 and consisted of emcees Corpse Collector and Killa Klown. Throughout the years the group remained the definition of independent and lived up to the nickname “The Ghoztz Of The Underground.” They were not featured on any albums outside of their label “Dead N Dirty Produktionz” and all the groups album artwork, videos, mixing, mastering, and etc, was handled by them or their label.

Besides being a major part of four “Dead N Dirty Produktionz” compilation albums, the group released three albums. The first was released on 10-31-2007 and was an EP entitled “Open Casket.” In 2008, the group began a huge promotional campaign for the first LP “Back From The Dead.” The album was released on 8-5-2008 and featured appearances from The ROC and Project Born. It also contained production from Fritz The Cat and Stir Crazy. The group would spend the next year promoting and creating the next project “Nightmarez.” The group refused to release any information about the album including a release date. In the eyes of the DDC, it was a way to keep the world in the dark to add to the mystery of the “Nightmarez” album. Finally on 12-29-2009 the group would drop the album. It featured appearances from Myzery and Frank Nitty of Project Born. The album was completely produced in all aspects by the label, making it just another testament to the groups independence.

The groups first live appearance was on 2nd Stage at the 9th Annual Gathering of the Juggalos during artist Str8Jaket’s set. The group would go on to pay dues opening for Esham, Critical Bill, Mastamind, and Project Born. At the 10th Annual Gathering Of The Juggalos, the duo headlined at the infamous “Club Chaos” and played another surprise performance. After that, the group opened two dates on the “Bang Pow Boom Tour” with Insane Clown Posse, Hed PE, and The Dayton Family. The months that followed saw performances with Anybody Killa, Motown Rage, Mr. YUG, and Awesome Dre. In 2010 the group opened on “The Slaughterhouse Tour” with Twiztid and Potluck.