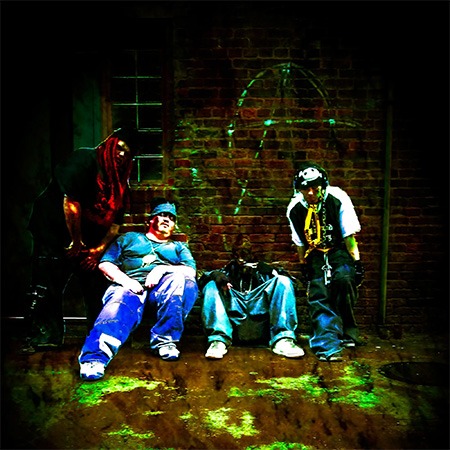 November the eleventh, two thousand-eleven an inter-dimensional gateway was opened. From that gateway came the Wazteland Warriorz. The group emerged onto the underground and independent music scene with the debut album “Greetingz from the Wazteland” on March 21, 2012! The project was a dark glimpse into a dystopian post-apocalyptic future chalked full of mutants, zombies, werewolves and every horror trope you can think of. It featured the singles “Durty,” a new type of scrub life anthem for the downtrodden and “The Moon” in which the group goes on a horror movie like slashing spree.

Their formula of dark lyrics and comical punchlines reminiscent of legends like the Insane Clown Posse, along with a collaboration with underground pioneer Mastamind of NATAS fame garnered the album enough momentum to land a national distribution deal with Michigan based Long Range Distribution by that October. The group toured and opened for major names promoting the album the rest of 2012.

The loss of multiple loved ones and the success of Greetingz from the Wazteland fueled the group to head back into studio at the start of 2013, creating their sophomore album to be entitled “Bcarefulwutuwish4”. This time out taking the audience on a magical adventure with a bit more than just a sinister twist to the plot. Tony Frankz and Stank Naz-t find a genie who decides to make the duo suffer for each wish. The group found themselves approached by Smokebox Music Group, which had just signed a distribution deal with Universal Music Group.

Released on April 18th, 2013, the album produced the single “Outofcontrol,” a story about demonic possession, followed by “Make-a-Wish,” a heavy almost fight type song in which the duo take the place of the genie. The album also contains the emotionally charged “One Wish” and comically disturbed “Kinda Bitch 4 Me” featuring Cykosomatik in which each artist describes their perfect significant other.

While the momentum continued with live shows, opening up for some major names, and an official performance at the 14th annual Gathering of the Juggalos, unfortunately the new distribution deal was full of scandal and legal turmoil with the CEO being charged with embezzlement. Frustrated, the duo added guitarist Filthy Footy and DJ Mold3 to the mix. They headed back into the studio to re-create a new version of the “Bcarefulwutuwish4” album with a more metal edge referenced as “The Platinum Verzion”. The album was put out in limited pressing through Long Range Distribution.

Following the legal disaster of Smokebox Music, the group went into promotional mode recording and releasing multiple mixtape songs. Adding a new lyricist by the name of Doc Durty and Mold3 making the switch from DJ to lyricist, the group experimented with lineups, looks and sounds. In 2017 though, Stank Naz-T and Mold3 went missing in action. Filthy Footy also went to county jail for a stint.

In 2018, Tony Frankz began releasing solo material including the single “Thinking Back” produced by and featuring Killjoy, along with Fat D & Hyper Sniper of Fatty’s House Records. He also released several self-produced songs including an emotional pop ballad dedicated to suicide awareness and prevention entitled “Alone in My Thoughts”. The song was released on Suicide Prevention day (September 10th, 2019), three months after Frankz lost one of his twin sons to suicide.

After the release of Filthy Footy and return of Mold3, the three are now back as the Wazteland Warriorz. Having successfully released the single “Fortune Teller,” as well as a slowed and screwed mix in April 2022. The group is now pushing their single “Ninjaz.”