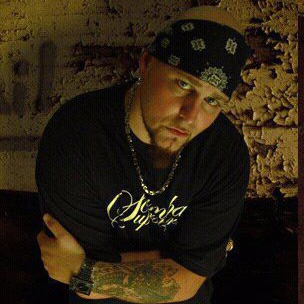 Q Strange came up in the working class city of Providence RI. Life wasn’t always easy for the self proclaimed “Steven King of Hip Hop.” He was an only child in a single parent household and had to fend for himself most of his childhood. He always maintained a close relationship with his mother who was a drug addict for most of his young life. At the age of 9, he spent time in a pediatric mental hospital when teachers found he spent most of his time in class making disturbing drawings instead of classwork.

Throughout childhood and into his teenage years, the kid who would later be known as “Q Strange” was an outcast. Never getting ahead in his studies and rarely attending classes, Q fell in love with the art of hip hop. Even at the age of 12 he was penning verses rather then school essays. Moving around and changing schools make it difficult to keep friendships outside of his own family.

Q Strange recorded his first demo at 14 and knew at that moment that this was what he wanted to do with his life. At the young age of 16, Q lost all he had in life and was forced to support himself when his mother passed away due to a drug overdose. Virtually homeless and depending on the kindness of friends and family, he bounced from place to place doing whatever he could to survive.

Q was heading down the wrong path, getting arrested from charges ranging from shoplifting to felony assault before he was 18. It was at this time he hooked up with a local hip hop collective of MCs, DJs, and Producers known as “3rd Floor Productions.” His friendship with DJ JD would be one that would ultimately change his direction in life. Although the group was low on funds and had limited studio equipment, JD acted as a mentor to Q (known as Mista Jinx at the time) and taught him the art of beatmaking and song structure. Recording with the group as well as solo projects, he performed shows and ruled the battle circuit until the crew disbanded around 1997.

Taking a break from music and trying to struggle with the everyday stress of being broke and working hard, Q returned to the music scene this time with a whole new darker sound and persona. He recorded Murder Kill in ’97 and locally released a bootleg tape with a dark hip-hop sound and graphic horror subject matter that garnered a huge response from a diverse group of music fans.

As word of mouth spread, some fans in the Midwest dedicated a website to Q Strange introducing him to the world. In 1998, Q released another bootleg entitled “Decayed Thoughts” which was well received and earned him enough money to release his professional debut “Creation to ExeQtion” in 2000. The concept album, which was an audio horror “movie” with each song connecting to the next telling a chilling sci-fi horror tale of a deranged serial killer, developed a cult following and soon Q Strange was known all over the globe as the next big thing in the dark underworld of horrorcore.

In 2003, after several deals gone bad with different record labels, Q independently released his second album, “Strangeland.” This album brought the murderous style that his fans had come to know by now, but also balanced out with more “traditional” hip-hop songs and emotional tracks proving that there was more to Q Strange than just a gimmick.

Both albums moved thousands of units with no distribution outside of mail order and consignment deals with various merchants, and was widely bootlegged all over the world. That, in addition to extreme high energy live shows, earned Q a huge fanbase, and got the attention of the music industry as different labels showed interest in signing him.

In late 2004, Q Strange inked a deal with Mad Insanity Records joining the ranks of underground legends such as Ganxsta NIP, Mastamind, and Flatlinerz, along with other highly respected up and comers, such as Bay Area horrorcore artist and CEO, Mars.

After his brief stint with MIR, Q went on to release Return to Strangeland, in the midst of a small feud with underground titan, Tech N9ne, and later Scumbag Superstar, which was a departure from his strictly horrorcore and hip-hop roots.