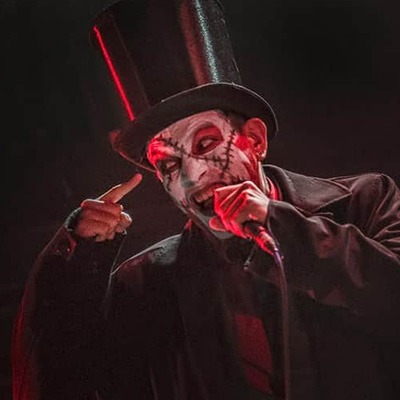 Rusty Doxtador, born half human, half Nosferatu (vampire) and the bodily host to a soul collecting demon named Nos Insidious. As a child he struggled keeping his humanity in check as it was being overthrown by vampiric tendencies. The demon stayed at bay. But as he grew older he began lashing out resulting in a trance like state exposing pale demon eyes. Rusty’s interest in music began at an early age and was also admired by the demon. Hitting his teen years, Rusty and Nos’s musical preferences had revolved around Rusty being more interested in Rap and hip hop where as Nos was interested in classical and metal. Rusty had learned how to balance his vampiric side without becoming inhuman and had also learned he can bring forth Nos Insidious through creating music. So then Rusty took upon the title of Nos Insidious and began rapping.

After years of hard grind, performing various venues with TruRez Crew even performing with famous Canadian Hip-Hop legends Swollen Members and a 2 year hiatus from music he is back at it again and currently booking shows and recording albums. His most recent release is entitled “Tales from the Mausoleum Mixtape vol. 1” Hitting the stage again with the likes of Snak The Ripper, Golden, Capitole D, Fallen Ones, Twiztid, Blaze Ya Dead Homie, Lex The Hexmaster, Boondox, BLK C-80, Henry Booka, Cheif Mojo, Frank Douglas, J-Rez and the one and only Insane Clown Posse. Nos Insidious is a versatile rap lyricist who’s style ranges from dark underground horrorcore to catchy groove pulsing club songs. His stage energy is relatable to that of a thrash metal show and leaves the crowd wanting more.

Nos is currently a member of Hex Mob Family Ent.