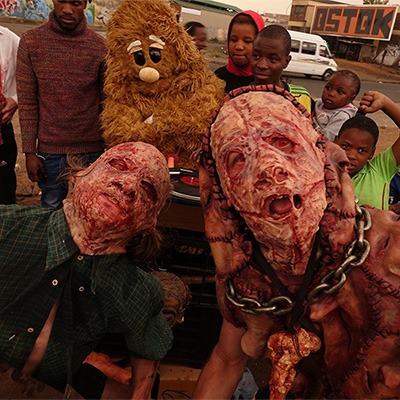 Mensvreters are a 3-piece cannibal rap group from South Africa. Abandoned as infants Brolloks and Boggel grew up in the brutal bowels of Joburg. With its high murder rate and lack of food, they developed a taste for human flesh, not only as a food source but discovered the many ways to get high off and addicted to humans such as smoking ass pubes with gall stones and snorting dandruff. Zet once had his own majorly popular South African kids T.V show in the 80’s and 90’s. After it got cancelled, Zet ended up homeless on the streets, depressed and addicted to TIK. Brolloks and Boggel found him curled up and crying under a bridge, so they took him under their claws, toughened him up and showed him the good shit in life IE. Human meat. With the 3 of them tik’d up on pubic hair and Jenkem, they started making the most gangster tunes ever created in human history and became known as MENSVRETERS.