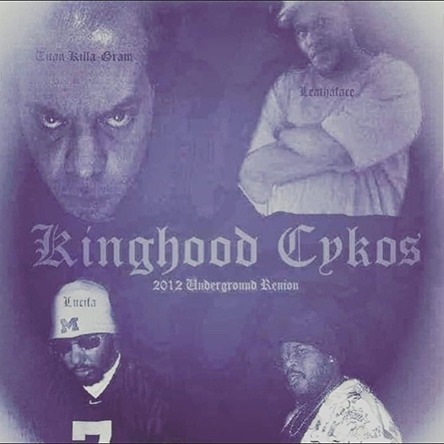 In 1991, Titan Kill-a-Gram met LeathaFace and his brother Dr. Jekyl in high school. The trio formed the Kinghood Cykoz alongside two other members, leading to the creation of their debut, unreleased album, “Tha Otha Side of Hell.” In 1994, down two members — Lucifa’ and Lunatic — the group would go on to release the album “211”. Sadly, Dr. Jekyl and Lucifa’ have both since passed away, leaving Titan and LeathaFace the only members left in the group.

Heavily influenced by the sound of the Geto Boys, Kinghood Cykoz really had no idea that what they were creating was borderline horrorcore/gangsta rap. Aall tracks that were ever recorded were done so at Boomin Records Studios by engineer DJ Clay of Ruff ‘n Rugged. Even though their style and sound can be compared to local favorites, The Dayton Family, Kinghood’s music was always a bit darker in both productions and lyrical content.

Before his passing, Lucifa’ aka $tainle$$ $teele also released the “Full Moon Over Flint” mixtape. Titan has also added bonus, unreleased tracks by Lucifa’ and Flint group Hardware to the long list of about 30 total tracks that the Kinghood Cykoz have ever produced.

Titan is currently working towards pressing up the full Kinghood Cykoz discography, due to the fact that nothing ever heard by fans was officially released.