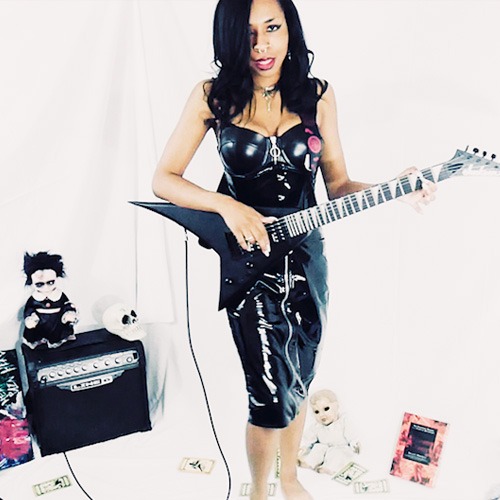 Based out of the small neighborhood, Montbello, residing in Denver,Colorado, Jade The Nightmare remains one of the most original female artist in the surrounding area. Her sound pulls influence from the king of shock rock known as Marilyn Manson and content influence from the late great Tupac Shakur and many others.

Possessing her first microphone at the young age of 11 given to her by her father. Jade was ecstatic to write her raps first consisting of just her life as a young female artist living in a middle class African-American family in the 303. Jade’s music took an enormous turn in her later years when her father soon passed away without warning. This took a toll on her mindset and began to reflect signs of sadness and confusion in her music. Music and family were the only things that fill the void in Jade’s soul. To worsen her situation, she underwent another death in the family the following year after her father’s passing. A sense of numbness grew within her, but the one tool she used as a hobby now became an outlet to escape her conjured demons.

Jade began to develop her signature sound self-titled as “GothHop,” which is the genre she used to describe most of her music. Her music puts a dark Gothic vibe on the hardships some undergo in their life span, discussing sensitive topics such as rape, murder, poverty, depression, racism and many more. Jade’s take on music has grown into something beyond just a black girl writing raps in her mothers house.

Jade is in the early stages of her company “Death Delight Creations Inc.” as well as her independently owned record label “GothHop Empire Ent.” She has accomplished a lot before even hitting 20 years old, as of 2018. At the time of this bio, Jade has released three complete full-length self-released albums as well as one EP. She has worked with 50 other artists in and out of the United States. She has also signed with two small record labels including Unforgiven Records (2015-2016) and Pariah Music Ent (2017-present).