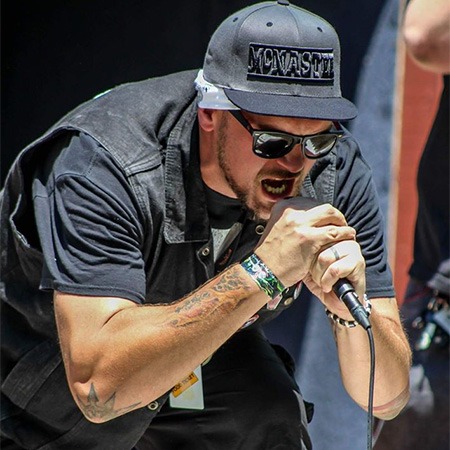 H8TRiD aka The A.D.H.D. Don Mega because much like his personality, his music tends to be all over the place. H8TRiD is know for his sometimes-funny, sometimes-deep, sometimes-hype but always real lyrics with creative samplers and fresh beats. H8TRiD is also known for his powerful performances and stage presence! He has played with many national acts such as DMX, Bone Thugs, Kottonmouth Kings, Tech N9ne, Paul Wall, Deuce, Snow The Product, Slaine, Blaze Ya Dead Homie, Twiztid, Vanilla Ice, ABK, Hopsin and dozens more across the east coast and parts of the mid west. H8TRiD has also played festivals such as FuzeTival, Gathering Of The Juggalos and UPStival. Other achievements include local television, college radio, local magazines and newspapers, local award nominations, introducing other artists to the scene (such as Whitney Peyton, Durte & Optymus) and being the first rapper to play alot of Rock only venues in the area, hence opening the doors for many others. His motto is “Fitting In By Standing Out” and that is exactly what he does.

H8TRiD started in a group called PeR-VeRSe in 2004. In 2005 they put out an EP entitled “Just When You Thought It Was Safe.” It sold close to 1,000 copies. In 2006 H8TRiD decided it was to go solo. Since then H8TRiD has grown a solid fan base by booking dozens of shows across PA, NJ, Mass, IL, VA, CT, NY, WV, and OH, and has performed with national acts such as DMX, Vanilla Ice, Esham, ABK, Shop Boyz, Bone Thugs & Harmony, Tech N9ne, Paul Wall, Blaze and dozens more! H8TRiD has also played festivals such as 10,000 plus people event called The Gathering Of The Juggalos at the Bomb House in 2006 and was given the honor to play 2nd stage during one of the “hot spots” for the 2008 & 2009 Gathering Of The Juggalos and returned once again in 2012 with Durte. He also headlined the rap spot for 2006 Fuzetival (A Major Lehigh Valley music festival that donates to a charity) and co-headlined in 2007. H8TRiD has also been played on various college radio stations and made it into local magazines such as Merge, Pulse Weekly & Metromix. H8TRiD made a tv appearance along with Phatal on NZTV where they performed 3 songs and did an interview. In 2007 & 2010 H8TRiD was nominated for the Lehigh Valley Music awards for Best Lyrics, Best Album, Best Album Cover & Best Live Hip-Hop performer.

Since 2007, H8TRiD has dropped an EP, “Suprise Entrance,” and three albums with fellows S2R label mates, “Movement” Vol. 1-3. His highly anticipated “Personal Vendetta LP” dropped in 2009 which majorly helped to give H8TRiD a name for himself in the rap game which its very positive reviews. It featured such artist as King Magnetic (of AOTP), Intrinzik, T.O.N.E-z, Ill E. Gal, Delusional, S2R & More!! Most recently H8TRiD released a full length mixtape entitled “Weapon VIII” for free, as a way to reach new fans, thank old ones and a chance to experiment with a bunch of different styles.

When not doing his own music H8TRiD runs SideStream Records (S2R), which has become one of the most known underground labels to ever come from PA. The current roster includes, Phatal, R.E.G., Optymus, and N3Bo. S2R has helped past artists get a major start such as Whitney Peyton, D-RaNGD, Durte & Methotical.