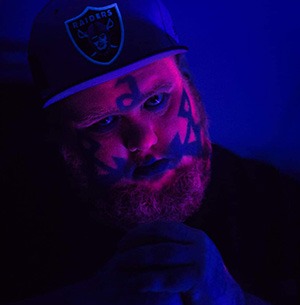 Born in the small town of Maysville, KY, EZ SIXOSIX found the love of music at an early age. He began dubbing over instrumental cassette tapes at age 10. At the time heavily influenced by greats like 2pac Shakur, The Notorious B.I.G, N.W.A, LL cool J, Run DMC, Snoop Dogg and more. Using music as a coping mechanism to overcome early signs of depression and anxiety he used music asa n outlet to escape his surroundings.

After run ins with local law enforcement he was forced to grow up quick and find a different way to express his anger and emotions. In his late teenage years he began to write and record his own material touching on life events and things that he had seen and been through, just the everyday struggle. After high school he was involved in the local music scent but never really took music seriously, it was just something to be a part of and a way to cope with hiss issues. After the tragic passing of his son in October 2005 he began to take music more seriously and really decided to pursue music fully. But along the way there were several roadblocks and obstacles in the way that derailed his progress drastically. After releasing several projects between 2008-2014 the end seemed to be creeping up fast.

After taking several years off and deciding to give up on his dreams one more giant push. In the winter of 2017 he made his return to the music scene with his album Verbal Disease. He decided to give everything he had to his music and never look back. With this new grind or die mindset he began to make noise and become noticed in the underground scene. Doing shows all over the Midwest region and opening for the likes of The Insane Clown Posse, Twiztid, Blaze ya Dead Homie, ABK, AMB, Tech N9ne, Bone Thugs n Harmony, Hopsin, D12, Young Buck, Kottonmouth Kings, Haystak, Jellyroll, Lord Infamous, DJ Clay, Rittz, Project Born, Prozak, Alla Xul Elu, Boondox, Scum, Insane Poetry, Juvenile, Pastor Troy, Yelawolf and More.

He began really solidifying his name and brand in the underground. Named the Voice of The Misfits by his peers he began speaking to the masses with that dark and rugged style all of his own. In 2020 while the world was in a crisis he linked back up with long time family Devil Boy aka Wicked Wayz who was fresh out the system and ready to leave his mark on the world. Both have aspirations and solid business minds and knew that they along with a few others carefully chosen members could create a wicked dream team only to be known as SINISTER MINDED MUSIC… The rest is to be continued.