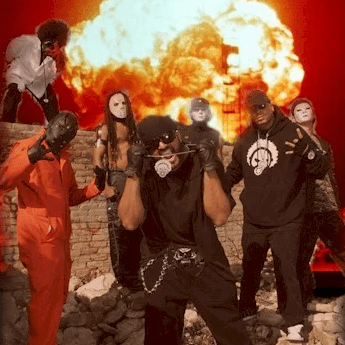 Dirty Wormz are a horrorcore hip hop infused rock band based in Austin, Texas. Dirty Wormz was formed in 2001 and is the brain child of rapper/producer Thomas Chapman a.k.a. Smackola.
​
Early Life
Smackola has been rapping and writing poetry since the third grade. During his early childhood he delved into musical genres such as R&B, soul and funk, but he got really heavy into hip hop when he moved to Clark AFB in the Philippines. During middle and high school Smackola also fell in love with rock music and he could routinely be found in front of his house doing BMX freestyle and skate board tricks.
​
In high school Smackola played in the marching band. He found a love for drums and performed in multiple talent shows, clubs and basement parties. As he progressed into electro funk and hip hop music he became a B-boy break dancer (Spider T), dabbled in tagging/graffiti, became a DJ (DJ Dog), and then he went on to being an aspiring rapper (Hitman Ice) and formed a group with childhood friend (Jay Love) known as Gangsta 2 Productions.
​
Career
After graduating high school in 1991 he moved to Montgomery, Alabama and started to pursue his music. After some failed attempts of getting his music out he decided to join the U.S. ARMY, which landed him at Ft. Hood, Texas. During his time in the military he traveled back and forth on weekends to Sacramento to record a group album called Mayjor Playahz with Mr. Dizz. The Ep was titled “Game Tight” In 1996 Smackola had a son and during the recording process his son passed away from SIDS.
​
Not one to give up, he got out the military in 1997 and proceeded to record his first solo project “What Tha F%#k I Tell Ya”. He performed in numerous shows and went on tour opening for 2 Live Crew and others.

In 1998 Mayjor Playahz released there full album “19NinetyPlayaHA8TE”. He then met DJ Crash and the two began to rehearse and record together. Smackola’s name was starting a buzz in Austin because of his unique style of hip hop music and dynamic stage presence.

In 1999 Smackola caught the ear of World Boxing Champion Roy Jones Jr. who signed him to Body Head Entertainment. He released his first solo album VERBAL KONKUZIONZ in 2000.
​
Smackola was inspired by the onslaught of the 9/11 attacks to add more rock elements into his hip hop style. Initially, this new direction met with much criticism from his colleagues, fans and friends. Smackola set out to find someone who could relate to the style of rock music he envisioned producing. In time he stumbled onto A.J. and Alex Vallejo (from the award-winning band Vallejo). Smackola hummed A.J. some guitar riffs and A.J. played them identically on his guitar. Smackola developed the Dirty Wormz sound, style and vision and with the help of Vallejo they set out to create the band Dirty Wormz.
​
In the fall of 2002, Dirty Wormz released their debut CD The Infektion (Vmg / Waay Foul Muzick) to the rock masses and their first single “Top Of The Food Chain” (featuring Tony Park of the band Pushmonkey). It immediately catapulted its way up to the year’s top requested single on Austin’s 101X FM, as well as many other alternative rock stations. Dirty Wormz then hit the road quickly building a rabid fan base, winning numerous awards such as Austin’s “Best Hip Hop” award, and scored numerous songs on national television shows such as UPN’s America’s Top Model and MTV’s Road Rules.
​
In 2003: Dirty Wormz release the Epidemik DVD (directed by Louie Fattz for Fat Boi Media & Smackola for Waay Foul Television) with music videos, live performances and behind the scenes interviews of how the Dirty Wormz band came together -winning awards such as the Austin Music Awards and Austin Music Network “Best Urban Video”.
​
In 2006: Dirty Wormz recorded Parizite (Waay Foul Muzick / Ressurection) with Producer Dwight Baker setting their buzz even more ablaze. You couldn’t go anywhere in Austin, Texas with out seeing a Dirty Wormz t-shirt (Worm Wear) or hearing their music blazing out of a car passing by, but they seemed to fall victim to being overlooked when it came to festival shows and media. Many claimed it was because of their political views and hardcore and aggressive style.

In 2007: Smackola starred in his first movie role as a villain named “Blocko” the film is called “Pineapple” and it also stars Lee Tergesen, Skye Mc Cole Bartusiak, Eliza Swenson, Steven Chester Prince. directed by Damian Skinner
​
In 2008: Smackola stepped more into the roll of being a producer of his music by producing, directing and editing his own music videos under his company name Dirty Made Filmz. Smackola released the Dirty Wormz mixtape projects: Re-Infektion, Uncontrolled Audio Experiment (mixed by Dj Wes Sanders), and Mass Metal Mixslaughter. Smackola also continued to bring Horrorcore to the limelight in Austin Texas by sponsoring and head lining shows with local Juggalo, horrorcore and underground groups such as The House of iD at iconic Austin venues the Backroom and Antone’s.
​
In 2009: Dirty Wormz re-released The Parazite album on Bieler Bros Records (Skindred, Nonpoint, Soil). Tech N9ne reaches out and calls on Smackola and Dirty Wormz to join forces and form a super group called “Kabosh” along with Him and Krizz Kaliko under the Strange Music Label.

In 2010: Smackola released his long awaited critically-acclaimed solo EP album “Syndrome Of The Al- Qaeda Sand Spider” ,which is the prequel to the Infektion album. Smackola began to write, shoot, directed and Edited his first independent film “WormHead” along with a Worm Head comic book (DWZ Comix).
​
In 2011: Smackola premiered his first independent directorial debut with a film titled, “Worm Head” at the annual SXSW film/music Festival .
​
In 2012: Dirty Wormz released a dubstep mixtape called Art Of The Bloodbath, mixed by DJ Exceed that included 5 remixes, numerous music videos, and a dubstep video DVD. The band continued its trek across the US sharing the stage with national acts such as Korn, Skindred, Ice Cube, Naughty by Nature, Ying Yang Twins, Tech N9ne, and Bone Thugs-N-Harmony.
​
The new CD from Dirty Wormz titled Outbreak (produced by Smackola & AJ Vallejo) takes their game to a new level – spitting harder rhymes and churning faster wig splitting riffs guaranteed to make any pit erupt. Featuring guest appearances from Tech n9ne, Krizz Kaliko, and Benji Webb of Skindred.

Not one to sit back and relax -Smackola released a free Dirty Wormz app for all smartphones to keep up with tour dates and news. Smackola was also featured on Tech N9nes Fifth Ep “Boiling Point” on a song called “Fire in Ac” along with Tech N9ne and Krizz Kaliko.
​
Smackola was also asked to be on a EP project called “Satan’s Playlist” that will be co-produced by Clown of Slipknot.
​
In 2013: Smackola was building momentum ready to release his follow up solo album and released the single “Ghost Of Bin Laden”, but then things took a turn for the worst as Smackola’s mother who was a veteran also an established musician and two time cancer survivor passed away on the 22nd of February.

He decided not to release the single but determined to keep pushing he produced one of his best songs to date and released the single titled, “When the Morning comes” as an ode to his late mother. In April Smackola went on to headline a tour in Canada. Then upon his return from tour immediately released another single, “Wicked Soul” along with Kung Fu Vampire. Then he released the super banger titled, “Do My Dance (bang bang)”
​
In 2014: Smackola released the single and video “Shattered Stone” feat. Surabian and Roy Jones Jr. Smackola wanted to expand his musical talents and so he taught himself to play piano and released the ‘tear jerker’ single and video called, “Dreamz a Memory”, that won Best Unique Performance (Jump on it), that same year he went on to win Solo artist of the year AHHA, and Capitol View Arts presented him with a Growing The Tradition Award for his Outstanding Contributions and achievements. Completing the year off with another tour Smackola returned to Canada for the Re-Invazion tour.
​
In 2015: Smackola began to concentrate more on the brand side of Dirty Wormz Merchandising with a complete online store,won an award for best music video of the year (Magic Video), and presented events with Dj Versus by presenting the, “Hot Summer Nights Tour” , and released two more Dirty Wormz singles, “Uncle Tom’z Cabin” & “Welcome 2 Da Murda Show”
​
In 2016: Smackola started working on a book and audio book and continued in his pursuit of Dirty Wormz brand awareness and expansion. In September he released another solo album entitled “The Thomas Brookz Project” which is the prequel to “Verbal Konkuzhionz” along with releasing two singles and music videos, “HomeGrown” and “Glass Sky”
​
In 2017: Smackola Pre-Released singles, “A Better Me” and “Murda Dance” and then “My Enterprize” in 2018.
​
In 2019 and beyond : Smackola took time to build up his Worm Wear Brand even Bigger. He also plans to release another solo album “February Rain” in January, 2020. and Plans to Re-release his first Solo album ‘Verbal Konkuzhionz” in April 2020 in celebration his 20th year anniversary as a published music artist.

Talks of becoming an author beginning with self Published books, an Autobiography including untold stories of the long ride through painting a vivid timeline on his come up in the music business, and a poetic conspiracy book called “The Intergalactic Pussy Magnet”. Along with the long awaited unreleased uncut independent film directed by Smackola titled, ‘Worm Head” in October 2020.

With plans of a Grand Finale of Projects, such as, Smackola “The Dark Art of The Murderouz Mr Mozart” – a Best Of Album, and Smackola’s final album titled, “Icon” and lastly of all the highly anticipated Dirty Wormz album already in the works called, “Amerikkkaz Nightmare” due for release in 2025. Smackola says he will still perform shows here and there however he feels he has an extensive catalogue of music and body of work. That now he can commit more energy and focus on expanding the ever developing and growing branding side of Dirty Wormz including Worm Wear and other projects.