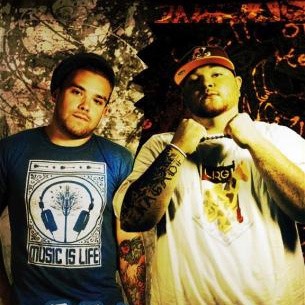 Dead Poets is an American hip hop duo from New Jersey, consisting of rapper/producer “Tab” and rapper “Renagade”. They perform both as the group, Dead Poets, and independently in an array of venues.

Based from Roselle, NJ, they have built an impressive following within the Tri-State area and are expanding rapidly across the country. They were originally known as “Dead Poet Society”, but later changed the group’s name to “Dead Poets”. The group’s style consists true to the hip-hop foundation of lyrical skills with themes across the board, from love and hate to the urban party scene.

With a large portion of the production done by “Tab”, the self-taught musician (guitars, live drums, programming) uses a mixture of samples and live instruments to create boom-bap heavy melodic tunes, infusing anything from old school rap to rock to reggae. Their infused melodies are complimented well with sung hooks by both. The group consists mainly of the 2 rappers, but expands by 4 additional members to a hip-hop/rock live band (Empyre Village) for shows. They are often compared to a mix between “Wu Tang Clan” meets “Sublime”.

Dead Poets have independently released three mix-tape/albums: “The Kenny Chang Tapes” in 2008, “To The Grave” in 2009, and “The Empty Bottle Project” in 2010 all available for free download at http://www.empyrevillage.com now. The group has collaborated with artists such as “Mr Doitall” (Lords Of The Underground), Pacewon (Outsidaz), and many others.