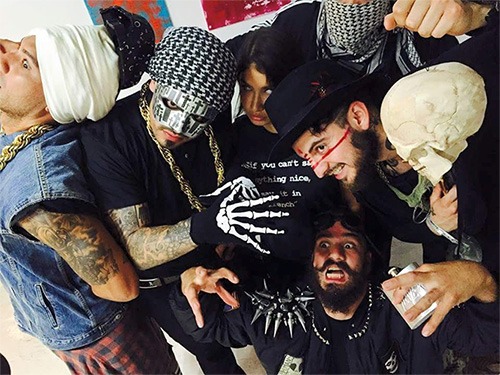 Assembled in the streets of urban Los Angeles circa 2010 B.C., The Blaq Tongue Society was formed by founding members Strang3r Dang3r, Severin Kairax, Louie Syntax , Whoo-Dat, and VICE the Anti-Hero. This Hip-Hop ensemble came together to oppose the stagnant state of affairs in the underground hip-hop scene of the planet commonly known as earth.

Harking Back to the roots of the Streets and the ancients, Blaq Tongue Society Brings a unique twist to the genre by bringing back the true rebellious nature of hip-hop, with a very punk rock attitude. Much of their music has influences in Metal, Punk, Jazz, Funk, and some horror thrown in for good measure. This cauldron of influences is very signature of the LA underground scene today. BTS chose hip-hop as the first medium to transmit.