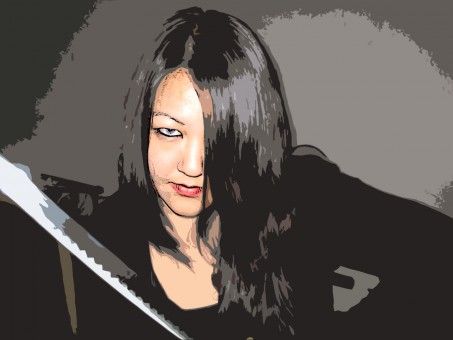 You put the headphones on. Out of the darkness, a shadowy figure beckons you to come closer .. as you approach you notice this figure to be a woman… she is unlike any other you have seen, almost as if she was from another realm of existence. Her eyes seem to read inside your very soul as you become hypnotized within her gaze. She knows your darkest secrets, and whispers them softly into your ears with a voice that penetrates your mind like the echoes from the Otherside… You attack her in a rage as she discovers your inner demons and presents them to you like a sinister gift… Your assault is futile as she dispatches you easily and fades back into the night… She is S.E.P., and she hails from the Netherworld!

With her unique brand of versatile lyrical content and vocal style, S.E.P. is part of the Underground Rap scene with an unmatched vengeance! She made history as THE FIRST FEMALE ASIAN HORRORCORE ARTIST IN THE WORLD!

Her songs contain deep and powerful lyrics and are regarded as underground classics. Being the only female artist a part of Netherworld Records, and one of the only female asian horrorcore and underground hip-hop MC’s in the United States, she represents with a ferocity that matches her male counterparts on the label and destroys the competition!