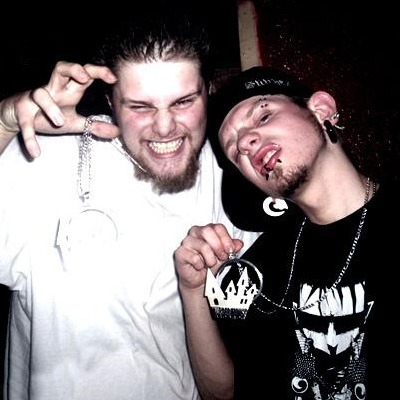 Mental Ward began in the early days as cWc (chemical waste children) and consisted of Mr. Stitchez amd Kontamination. They grew up in Rast Dearborn, MI and became friends early on, during elementary school through their love of wicked music. They then began recording through a karaoke tape player and made a ton of their beats on the video game “MTV Music Generator” for Playstation. During these years, they had moved around and gotten older and had met a lifelong friend who joined with them to collectively create “Mental Ward.”

The newly formed group started gaining a following by doing shows in VFW halls in Southeast Michigan and Northwest Ohio. They then came in contact with other groups such as “NDC.” The record label, Murder House Records, signed them and released “Godz Unwanted Children.” From there on, the sky was the limit. As a sub-label of MHR, “Kill Yourself Productionz” (KYP) was also created, where Mental Ward signed the group “NDC,” Demonic, and Lyssa Cer as their first label mates.

KYP and MHR would then reign supreme in the Southeast Michigan area, holding at least two shows per month in a venue that was basically their very own home. The venue itself also became a bit of a new Horror staple, too; It was known as the “Mod X” (Modern Exchange). These bi-weekly shows grew and had the likes of big names attached, pulling anywhere from 200 to 500 people on any given night.

From 2003 to 2011, Mental Ward would put out three more albums, one being a sampler and the other two, studio recordings. Things were going very well and Stitchez and just wrapped on recording a solo in New Mexico with the SKR camp. Unfortunately, it wasn’t soon after that Stitchez passed away.

The underground shook at the loss and the people closest to this tight-knit circle were lost. They continued to do as he would have wanted, with Big K dropping a solo, “The Cellar Door.”

There has been a lasting and sorrowful impact at the loss of Stitchez through the underground. As for the others related above, life is swell. While this was to be a biography about Mental Ward, in the hearts of those who were close to them, it is hard to not think of yourself as an alternate member, as they were beyond kind and welcoming in every way.