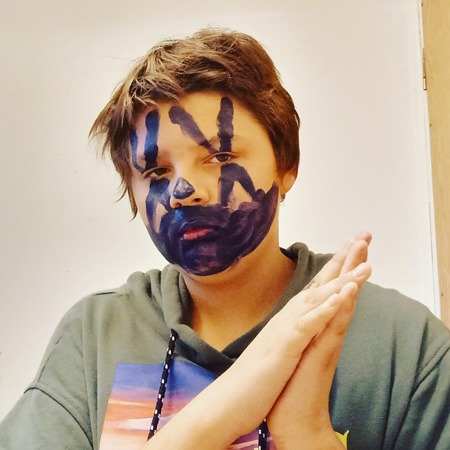 Lil Ninja (Damion Brooks) was born in a small town in Western Michigan, United States in 2009. He lived a normal life until, at age 6 in 2015 he was introduced to horrorcore by his dad. His dad handed him a CD copy of Insane Clown Posse’s album Hell’s Pit. Once Lil Ninja heard it, BLAM, he was a juggalo from then on. He loved this album and as he listened more and more, he got introduced to the album The Marvelous Missing Link:Lost by Insane Clown Posse. Yet again, he loved it. By age 8, he forgot all about ICP due to him not being able to have their music at his fingertips.

In 2017, the juggalo gods gave him the song Piggy Pie reintroducing him to ICP. Now he begins research. He finds more artists, such as Blaze Ya Dead Homie, Twiztid, Dark Lotus, and the rest of the Psychopathic Records roster. Then in 2019 he stumbled into the Juggalo YouTube (YJC AKA Juggalo YouTube Community). He found all these people such as DC Faygo Guy, Carnival Spirits, and many more.

During all of the juggalo research, he faced a massive loss — In 2020, Lil Ninja’s house burned to the ground. With no where to go, he begins to turn to juggalo music. He stayed with someone for a good few months. In that time period, he started a YouTube career; He called his channel “Taco Demon.” After all the failures, he was focused on one thing — JUGGALOS.

In 2021, he decided to rename himself Lil Ninja. He uploaded reviews for ICP’s Carnival of Carnage and The Ringmaster. Right then, he was noticed by a friend of Scottie D, the infamous founder of FaygoLuvers.net. Their name was Milinda Villegas and they told Scottie D about him. At the time, he only had a few Juggalo CDs, so a group of Scottie D’s friends put together a box full of juggalo merchandise for Lil Ninja. When he got this box, his videos began to blow up.

Lil Ninja has come a long way since, by gaining attention by DC Faygo Guy, Humble Among, Bartleboss and the dead guy show, Faygo Luvers Heaven, Don Chaos, Deck One Dealt, Open Hearted Juggalos Recovery And Support, and more, within 2022. Humble Among did an interview with Lil Ninja, and shortly after that he was on Deck One Dealt – Juggalo Podcast. After that ,he gained friends with lots of new homies like Komplex Mothra, Nobody Man, Humble Among, Raziel, Woody Woo, and more. At school he had some good homies to roll with like his best friends Camdyn, Jenna (Jacx), Aniya, and Kaleb.

Now, in June of 2022, Lil Ninja drew inspiration from a handful of artists such as Humble Among, Komplex Mothra, Insane Clown Posse, Ouija Macc, and Mike E Clark. He began advertising an album called “Beats From The Grave.” It came out on July 2nd Of 2022 and it had a deep concept of a man who tried to raise the dead with his friends who ends up getting murdered by a demon when he digs up the grave. His friends warned him, but he did not listen. Now, as he dies, he goes into hell and when you hear a beat coming from the grave, that is the man trying to escape hell. Adding to that concept with The Monster EP, released in August of 2022. It added on being the fact that the man arises from the dirt as a mutated monster and roams the streets with beats.

To hold off until The Aftermath album comes out, Lil Ninja is making a mixtape called the Rotting mixtape, which is out now (9/3/22) On October 19th, The Aftermath Side A will be released, and in December, Side B will be out. Then some massive plans and some side albums will be coming out… You’ve been warned.